The Cult Leader is a Guaranteed Unique Special class that belongs to the Cult faction with the objective to defeat the Blue Dragon and any neutrals that seek to do them harm. As the head of the Cult of Mithras, The Cult Leader is Unique and will appear in every game where the Cult is present.

*Note: From Day 4 the Cult Leader is now able to commit suicide. This should only be used if necessary. Using this for no good reason will result in punishment.

Lore: Whispers of the Gods

A wounded man walked slowly down the end of the crimson corridor, passing body after body, out of Castle Demwir; incantations echoing through his head, "Who--what the hell is Corax? ...Certainly not another one of those voices, I hope"... "Mithras... this other voice: what are you? How do I even know your name?"

Bursts of crimson red rushed gallantly to the top of the snow after each footstep. "I must stop wasting time, for I have important business to attend to". "NO! You're mad! Just get out, already!", the man screeched while clenched his head, writhing in an internal struggle as he ground his teeth in agony. Recollecting his thoughts, he stepped further into the frosty midwinter's evening, discovering only the stinging down his face by the chilled air from clawing his head. He had made up his mind -- or had it been made for him? He was to leave this place and find proof! Proof that these "night whispers" of men--no, GODS-- existed outside his head. He knew they were real, but could only convince others with blood. However, there were no more in Castle Demwir to be convinced...

Throughout the night, he walked, gazing out into the darkness. "Masters!", he cried into the night, "Prove to me that you are real and that I am not a fool for trusting you!". There was only the eerie sound of silence. "I see! Of course, I understand". The man cried into the inky blackness of the night, "I must prove my worth to you: An army; a sacrifice...". He looked back and saw nothing but the night and the gazes from whatever lurks nearby the edge of the gorge. He knew he could not turn back. There was nothing at Castle Demwir; not anymore. He had to keep moving forward. The mist spread aside to reveal a vast structure.... Castle Adiart. He broke into a sprint as he ran towards the grand, sand-stoned castle, but swiftly collapsed from lack of energy, for he had not eaten in days. He collapsed by the gate as a Butler of Castle Adiart rushed him in and, seeing his robes, considered him to be of a noble status. Even the ice was too dense to even gather the tiniest water droplets. "How did this man even survive...?", the Butler questioned in his head.

As this was after-hours, the Butler brought nourishment and wine for both himself and for the waking man. He sat next to him, listening to the ramblings of a mad man about some unheard names: Mithras and Corax, and how he journeyed from Castle Demwir on his own accord. The Butler smiled as he drank his wine, gazing at the chalice he drank from that he never recalled seeing before. His white wine appeared red in the dark tavern - perhaps an illusion from the dancing flames of the fireplace. The man slowly leaned in towards the Butler, frozen with a smile, and whispered in an unfamiliar tone, "You... my flesh puppet -- you know what needs to be done". They both leaned back and merrily sipped their wine in silence as their crimson eyes continued dancing to the reflective glow of fireplace embers.

~Lore by Jasmine and assisted by Xblade 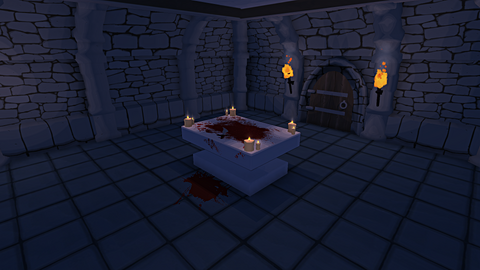